Machonews January 2021: A Snapshot of Gender Inequality Politics in Iran

Machonews January 2021: A Snapshot of Gender Inequality Politics in Iran

Welcome to the January 2021 Machonews English newsletter covering the most significant gender and women’s rights related events and policies in the Islamic Republic of Iran this month. This monthly newsletter is produced by Macholand, a project by Spectrum, a queer feminist NGO (Association 1901) based in France.

The Bill for “Protection, Dignity, and Security of Women Against Violence”

The Iranian government has continued to slow down women’s rights activists’ efforts to improve the situation for women in Iran legally. For the past 16 years, women’s rights activists in Iran have campaigned for the “Protection, Dignity, and Security of Women Against Violence” bill, and now the parliament is resisting accepting it. Cabinet ministers approved the bill against gender-based violence, which was introduced during former President Mahmoud Ahmadinejad’s administration in 2013. In early January, the bill was approved by the government and sent to parliament to become law. The Conservative Iranian parliament is yet to put it on its agenda when this newsletter was published.

The bill defines violence as “any behavior inflicted on women due to sexuality, vulnerable position, or type of relationship, and inflicts harm to their body, psyche, personality, and dignity, or restricts or deprives them of legal rights and freedoms,” according to Al Jazeera. Judges in September of 2019 finished the reviewing of the legislation. It must be reviewed and approved by the parliament and the Guardian Council of jurists and religious experts before it is implemented. Women’s rights activists continue to look into how parliamentarians will prevent the lessening of violence against women.

A national study conducted in 2004 found that of the women who participated, 66% of married women had experienced domestic violence at least once in their lives, and 30% had experienced physical violence. The bill’s finalization comes after a year of high profile gender-based violence cases, such as the case of Romina Ashrafi, the country’s own #MeToo movement in September, and a worldwide rise in domestic violence cases as a result of the coronavirus pandemic.

The supreme leader of Iran, Ayatollah Ali Khamenei, has been calling for an increase in Iran’s population for years, and officials are working to meet his demand. Despite the population growth rate decreasing, this is likely due to economic problems and changes in the family structure. The requirement for mothers and obstetricians to screen fetuses is now in the process of being eliminated by Iranian parliamentarians. This screening includes checking the fetus’s health and screening high-risk groups for infections, diseases, Down syndrome, and other genetic defects and physical abnormalities during pregnancy.

Previously, mothers of fetuses with congenital diseases were allowed to voluntarily terminate the pregnancy in a safe and hygienic environment. However, this exception will now be illegal, and abortion will remain illegal in Iran, and doctors and women who attempt it are punished. Kobra Khazali, chairwoman of the Women’s Social Council, has congratulated the efforts of “revolutionary members of parliament” to force mothers to undergo prenatal screening because, in her opinion, it was forcing mothers to kill their fetuses. Does Iran even have the necessary facilities to care for a new generation of children with congenital diseases?

The Death of an Ultraconservative Influencer

Ayatollah Mohammad Taqi Mesbah-Yazdi, an influential Iranian ultraconservative cleric close to supreme leader Ayatollah Ali Khamenei, died in Tehran. Mesbah-Yazdi was a prominent supporter of former president Ahmadinejad. Mesbah-Yazdi was known for being an opponent of women’s freedoms in Iran, including freedoms like women going into stadiums, despite Ahmadinejad announcing that he would allow women to attend stadiums during his presidency in 2013.

Despite his support for Ahmadinejad, Mesbah-Yazdi sided against him. After Ahmadinejad’s announcement, Mesbah-Yazdi said: “This is against the law and its rules, a woman cannot look at a man naked; it is forbidden.” Mesbah-Yazdi described men in shorts during football games as “naked men.” Following Mesbah-Yazdi’s speech, three sit-ins were held in Mashhad, Tehran, and Qom against women’s entry into stadiums. For years after this action, women were not allowed to attend stadiums. Although Mesbah-Yazdi has passed away, his dangerous ideologies remain in his students and followers and will continue to spread his message.

The COVID-19 pandemic has worryingly set back several decades of progress that women had made in the labor market. Lockdowns across the world have affected functions that did not lend themselves to teleworking. The Statistics Center of Iran reports that more than one million women have left the Iranian labor market in the past year. In the autumn of 2020, compared to autumn of 2019, 1.5 million people have been let go from their jobs, of which one million were women.

The center announced the unemployment rate for the third quarter of the year at 9.4 percent, which has decreased compared to the previous season – summer and autumn last year. However, the decline is due to the exit of job seekers from the market, not to the creation of new jobs, as the Parliamentary Research Center has previously stated. Twice as many women have lost their jobs compared to men, outlining the Iranian workforce’s systemic sexism. This same system will make the return of women to the force after the pandemic very difficult.

Tehran’s 13th Auction was held and broke the record for the most expensive painting sold in the auction. The work titled “Memories of Hope” by Aydin Aghdashloo was sold for $600 thousand. Aghdashloo, whose work has been auctioned and shown worldwide, is the most prominent figure to be accused in Iran’s #MeToo movement. He has denied all wrongdoing and accusations against him and even taken legal action against at least one of the women. None have withdrawn their claims. The accounts of the women accusing him of harassment have been widely shared in Iran and generated more criticism of the artist. Women’s rights activists believe that this bid was to support Aghdashloo after allegations of sexual harassment.

Zeinab Karamati, an Iranian female futsal goalkeeper, has been nominated for Best Goalkeeper of the Year. Futsalplanet named Karami as the Top 10 Female Futsal Goalkeepers of 2020 in early January. She is a member of Iran’s Mes Rafsanjan futsal team. Late last year, Iranian referee Gelareh Nazemi was shortlisted with nine other referees to receive the Year award’s Best Referee. 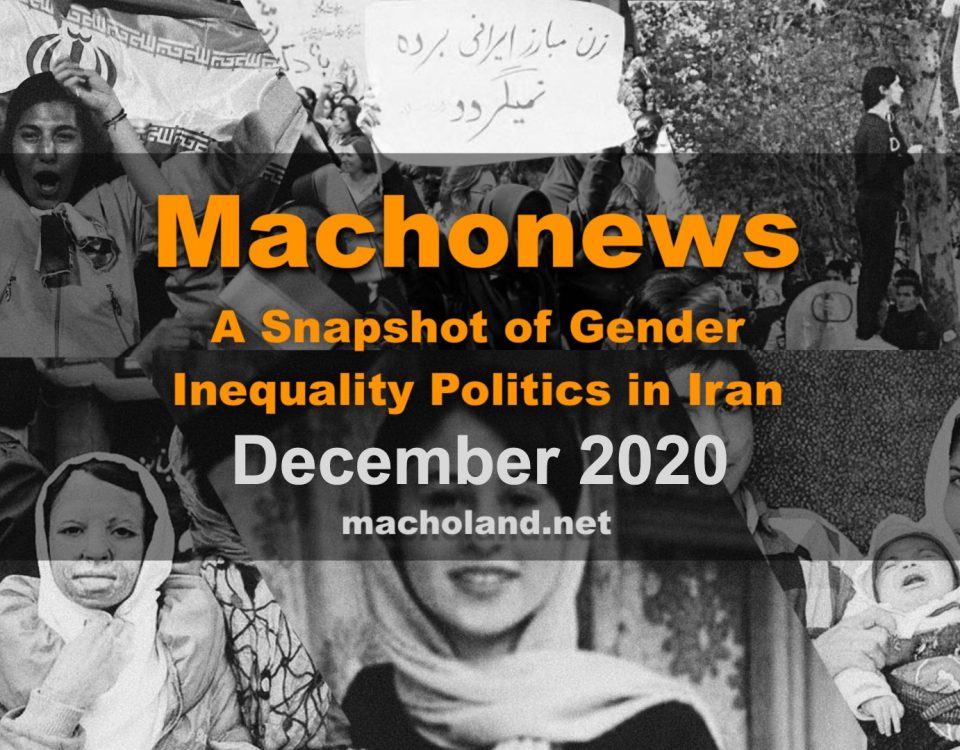 December 2020 Machonews: A Snapshot of Gender Inequality Politics in Iran